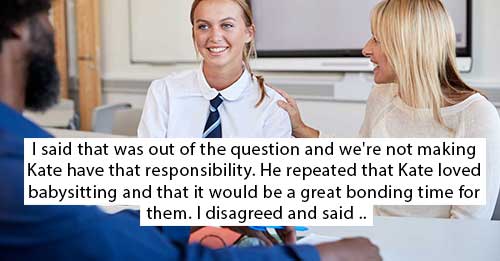 Me and Ben both work long hours but we managed to make it work. I work from 7-3 and Ben works from 9-5 Monday to Friday. Because of this Ben is in charge of the kids in the morning and I get the kids on my way home and take care of them until he gets home. Everything after is split 50/50.

I recently got a promotion at work I accepted because it was good pay however I had to work more hours. Two of those hours make me go over the school day so on two days of the week I won’t be available to pick up the kids and no adult will be home for an hour and a half.

I told Ben about the promotion and time change and he was happy for me and excited about my pay rise. I started to look for a babysitter for the kids for those three hours. Once I found quite a few who seemed like a good fit I went to Ben to see what he thought.

He gave me a strange look and asked why we needed a babysitter. I reminded him of the time changes and he said to just get Kate to look after them. I said that was out of the question and we’re not making Kate have that responsibility. He said that Kate liked to babysit and I said on the one off not something that she would have to work her whole schedule around. He then said that it would be a waste of money for a babysitter and we can use that money for fun activities for them and that I wasn’t thinking about the bigger picture. He repeated that Kate loved babysitting and that it would be a great bonding time for them. I disagreed and said there was absolutely no way I was allowing this and that he should start looking for a babysitter.

I thought I was doing the right thing but during the week he kept making jabs at me. For example, I suggested that we go somewhere expensive as a congrats dinner/date for us and he said that’s a great Idea too bad we can’t afford it. He also pointed out a few expensive things and made similar remarks.

This made me doubt myself a bit so I went to my friend. She agreed with him on the part about saving up for something bigger and suggested all the things we could do on holiday instead. So now I’m feeling confused. What do you think about this situation? Any advice for the wife… Here are a few comments on the story where it was originally posted: